What Do You Think About This Song?

We want to hear from you all.
Drop your comments
Short URL: https://is.gd/DLl6t5
Scan QR Code: 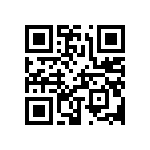